Liverpool take on Burnley at Turf Moor on Wednesday night. Here is the team we expect Jurgen Klopp to select for the game:

Liverpool will look to keep their top four hopes alive with a win when they take on Burnley at Turf Moor tonight. Here is the team we expect Jurgen Klopp to select for the game:

Goalkeeper: Alisson Becker was the hero as he scored a dramatic injury time winning goal to secure a 2-1 win at West Brom at the weekend leading to some fans suggesting [joking] he should start up front tonight! But the Brazilian is too important in goal so he’ll keep his place between the sticks.

Trent Alexander-Arnold is back to his best form and he’ll continue at right-back while Andy Robertson will once again start on the left side of the back four.

Midfield: James Milner could be back in the squad after returning to training but a place on the bench is probably the best he can hope for. Alex Oxlade-Chamberlain is also available again after recovering from illness but he’s also unlikely to start.

Liverpool skipper Jordan Henderson remains on the sidelines while Naby Keita is still unavailable but Fabinho and Thiago Alcantara are fully fit and should keep their places in midfield.

Klopp is likely to make one key change for the trip to Turf Moor with Gini Wijnaldum recalled in place of Curtis Jones after the 30-year-old was named on the bench on Sunday evening.

Forward: Diogo Jota’s foot injury isn’t as bad as first feared and he could feature against Crystal Palace on the final day of the season but the trip to Burnley will come too soon for the attacker.

Therefore, we expect Liverpool to go with the same front three that started at West Brom with Sadio Mane keeping his place alongside Mohamed Salah and Roberto Firmino in the final third. 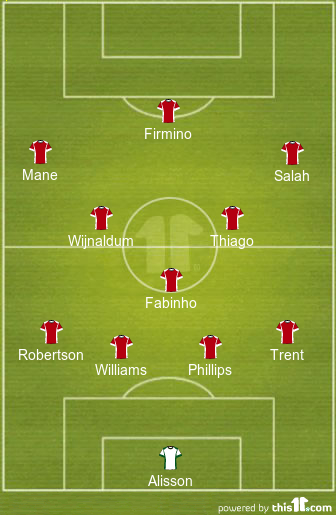