Arsenal will look to continue their recent good form when they take on Brighton at the Amex Stadium on Saturday evening. Here is the team Gooner Mac thinks Mikel Arteta will select:

Goalkeeper: Aaron Ramsdale has been hugely impressive since replacing Bernd Leno as Arsenal’s No.1 and he’s expected to keep his place between the sticks this weekend.

Defence: Arteta has found his settled first choice back four and I don’t see any need for him to make any changes against Brighton. Ben White seems to be growing in confidence each week so he should continue alongside Gabriel – who was excellent against Tottenham – in the middle of defence. Rob Holding and Pablo Mari will be among the substitutes.

Takehiro Tomiyasu put-in another superb performance during Arsenal’s win in the North London Derby and he’s set to continue at right-back while Kieran Tierney should keep his place at left-back ahead of Nuno Tavares.

Midfield: Arsenal have been dealt a major blow with the news that Granit Xhaka has been ruled out for three months with a knee injury that he sustained against Tottenham last weekend. The Swiss international has been a key player under Arteta so his absence will be sorely felt.

Mohamed Elneny and Ainsley Maitland-Niles are options for the Gunners but youngster Albert Sambi Lokonga is favourite to replace Xhaka. The Belgian international should line-up alongside Thomas Partey in the middle of the park at Brighton.

Martin Odegaard was instrumental during Arsenal’s 3-1 victory over Tottenham at the Emirates Stadium on Sunday so he’s expected to continue in the attacking midfield role.

Attack: Pierre-Emerick Aubameyang is set to lead the line up front this weekend after scoring in the North London Derby so Alexandre Lacazette will have to settle for a place on the bench.

Bukayo Saka should also keep his place on the right wing for Arsenal after an excellent display against Spurs while Emile Smith Rowe was many people’s Man of the Match in the derby so he deserves to start at Brighton.

That means Nicolas Pepe and Gabriel Martinelli may have to settle for a place among the substitutes this weekend. 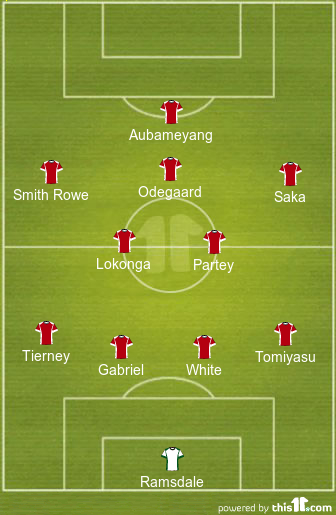