Manchester United take on Leicester City at the King Power Stadium on Saturday afternoon. Here is the line-up we think Ole Gunnar Solskjaer will select

Manchester United take on Leicester City at the King Power Stadium on Saturday afternoon. Here is the line-up we think Ole Gunnar Solskjaer will select for the game:

Goalkeeper: David De Gea appears to have cemented himself as United’s No.1 again following a string of impressive displays this season so he should retain the gloves with Dean Henderson among the substitutes.

Defence: Man Utd have been dealt a huge blow with the news that Raphael Varane has been ruled out for ‘a few weeks’ after picking up a groin injury while away with France during the international break.

Harry Maguire is also expected to miss out once again as he continues to recover from a calf injury so Solskjaer will be without his two first choice centre-backs this weekend.

Victor Lindelof and Eric Bailly are therefore expected to start in the middle of defence with Luke Shaw and Aaron Wan-Bissaka keeping their places in the full-back positions.

Midfield: Manchester United could be without Fred as he’ll arrive back late from international duty with Brazil. Leicester are a dangerous side so Solskjaer could may opt to bring in Nemanja Matic to play alongside Scott McTominay to give his side more physicality in the middle of the park.

Bruno Fernandes is almost certain to keep his place in the attacking midfield role so Donny van de Beek will have to once again make do with a place among the United subs along with Juan Mata.

Attack: If Solskjaer does go with Matic and McTominay in midfield then Paul Pogba is likely to be recalled to start on the wing after being named on the bench for the draw with Everton before the international break.

Cristiano Ronaldo was also controversially named among the subs during that match but the Portuguese superstar is expected to be recalled to lead the line up front for Man Utd against Leicester City this weekend. Edinson Cavani will drop out while Anthony Martial may also find himself back on the bench despite scoring against Everton last time out.

Marcus Rashford could make his first appearance of the season after recovering from an ankle injury but a place on the bench is probably the best he can hope for after so long on the sidelines.

Jadon Sancho will be pushing for a recall after being benched against the Toffees but Mason Greenwood may be given the nod to start on the right wing this weekend while Jesse Lingard should also be named among the subs. 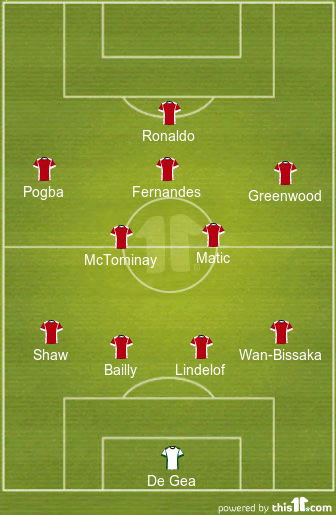