Liverpool they take on Watford at Vicarage Road on Saturday lunchtime. Here is the team we expect Jurgen Klopp to select for the game:

Liverpool get back to Premier League action after the international break when they take on Watford at Vicarage Road on Saturday lunchtime. Here is the team we expect Jurgen Klopp to select for the game:

Goalkeeper: Liverpool have been dealt a huge blow with the news that Alisson Becker will miss the game this weekend after his involvement in Brazil’s win over Uruguay during the early hours of Friday morning. Therefore, Caoimhín Kelleher will be recalled to start between the sticks.

Defence: However, Klopp has been handed a major boost as Trent Alexander-Arnold is fit to return after recovering from a muscle issue that’s kept him out of Liverpool’s last two games. Alexander-Arnold is expected to replace James Milner at right-back tomorrow.

Otherwise, we should see the same defence that started during the draw with Manchester City before the international break with Andrew Robertson continuing at left-back while Joel Matip appears to be favourite to partner Virgil van Dijk in the middle of the back four. Ibrahima Konate and Joe Gomez will therefore have to settle for places on the bench.

Midfield: Liverpool will be missing another key player for the trip to Watford tomorrow as Fabinho will also miss the game after starting for Brazil against Uruguay late last night.

Curtis Jones has also been ruled out of the trip to Vicarage Road after picking up a knock while away on international duty with the England U21’s while Thiago Alcantara is still recovering from a calf problem.

It leaves Klopp with limited options in midfield so we expect Milner to move in to a central role where he’ll be partnered by Jordan Henderson and Naby Keita with Alex Oxlade-Chamberlain among the Liverpool substitutes once again.

Forward: The Reds confirmed earlier today that Diogo Jota has been passed fit and is available for selection this weekend after recovering from a muscle issue that forced him to miss Portugal’s games during the break.

However, Jota may not be risked from the start so Roberto Firmino could lead the line up front for Liverpool tomorrow with Sadio Mane and Mohamed Salah offering support in the final third.

Takumi Minamino and Divock Origi will be attacking options from the bench but Harvey Elliott is obviously still out as he continues to recover from an ankle injury. 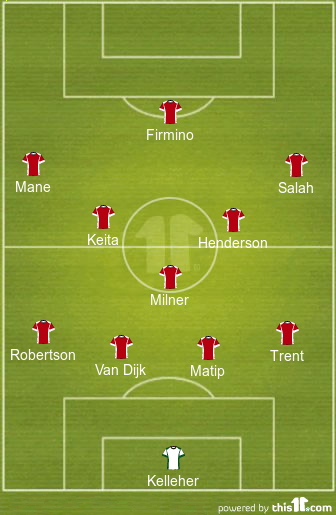