Arsenal take on Watford at the Emirates Stadium on Sunday afternoon. Here is a preview with team news, expected line-ups and prediction

Arsenal will be looking to build on their recent good form when they take on Watford at the Emirates Stadium on Sunday afternoon.

The Gunners have recovered from a nightmare start to the season and have put together an impressive seven game unbeaten run which has put them back in the hunt for the European qualification places.

Consecutive Premier League wins over Aston Villa and Leicester City have left Arsenal sitting sixth in the table – just three points adrift of third-placed Manchester City – so Mikel Arteta will be aiming to close-in on the top four with a win over Watford tomorrow.

They’ll be confident of getting all three points from a Watford side who head into the weekend action sitting just outside the relegation zone in 16th place following a disappointing start to the new campaign.

Claudio Ranieri’s men have won just one of their last five games [W1 D1 L3] and slumped to a 1-0 defeat at home to Southampton last weekend so the Hornets will be desperate to pick up a positive result at the Emirates.

Arsenal will hand a late fitness test to Kieran Tierney as the full-back bids to return from an ankle injury that’s kept him out of the last three games. The Scottish international is back in training so Arteta is hopeful he’ll be passed fit but Nuno Tavares has impressed during Tierney’s absence so could keep his place tomorrow if the former Celtic star isn’t 100%.

Granit Xhaka remains on the sidelines as he’s been ruled out until the New Year with a knee ligament injury that he sustained during the North London Derby win over Tottenham in late September.

Martin Odegaard is pushing for a recall after being named on the bench in the last two games and he could come in for Alexandre Lacazette.

Watford will be without Ken Sema and Kwadwo Baah after they sustained serious injuries in training this week while Christian Kabasele is still recovering from a hamstring injury. 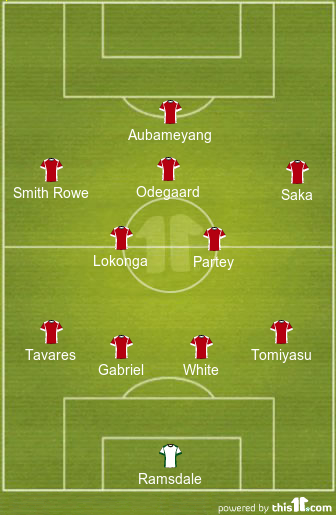 Arsenal vs Watford will be broadcast live on Sky Sports, kicking off at 2pm on Sunday. Subscribers can watch the game on their TV’s via their set-top boxes or stream the game live via the Sky Go app on mobile, laptop or desktop.

Fans will also be able to watch highlights on the Sky Sports Football Youtube channel shortly after the final whistle or catch highlights on Match of the Day on Sunday night. People can also watch the game live on a dodgy stream that can be found online shortly before kick-off – although obviously we cannot condone such a thing!

Arsenal 2-0 Watford: Arsenal have a terrific record in this fixture having won 11 of their 14 Premier League meetings with Watford. The Hornets have also lost six of their last seven away trips to the Emirates Stadium and come into this game in poor form.

Arsenal on the other hand seem to be moving in the right direction and are improving every week so we predict a routine home victory for the Gunners tomorrow.